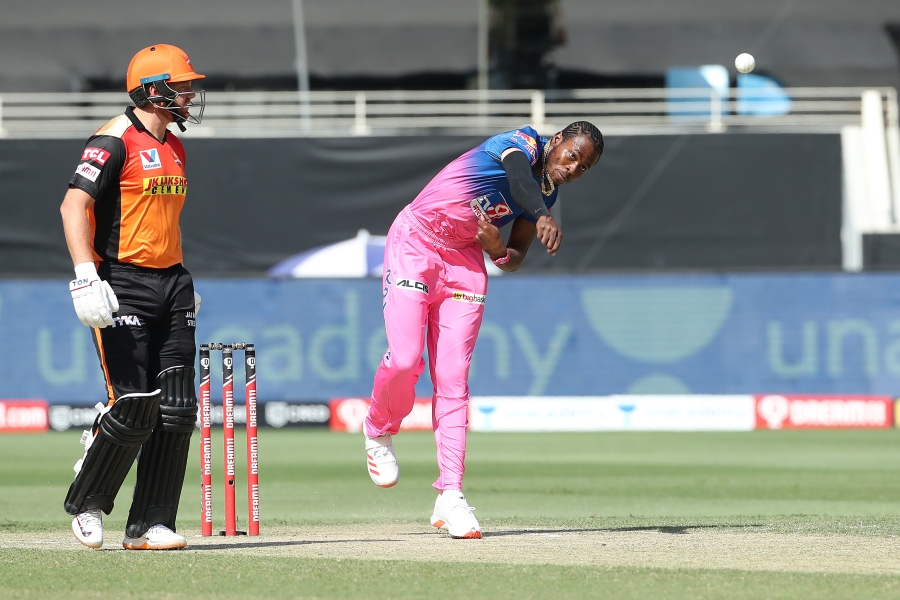 Where do IPL’s Purple and Orange Cap winners figure on the Criclytics Mid-Season MVP List?

The IPL has seen some tremendous performances by allrounders who have delivered with bat and ball. They seem to be dominating the MVP (Most Valuable Player) charts.

The Top 5 MVP players in IPL 2020 at the midway stage, are right now bereft of pure batsmen. The list has two allrounders and three bowlers. The next five from 6-10 comprise of three allrounders and two bowlers and includes the purple cap holder Kagiso Rabada at the 10th position. The orange cap holder KL Rahul does not find a place yet in the Top 10 MVP of the tournament.

Let’s have a look at how these players earned their points in the first stage. 100 points means they were the top player across the 22 players who played the game. So they were at the 100th percentile for that game. A player with a 98 or 97 score is usually the second-best or third-best player in that game. That’s the way to read the below table.  So a Green performance is great, a Yellow-Orange performance is moderate and a Red performance is below average

The MVP calculation takes into account the cumulative performances of Batting (Runs, Strike Rate, Boundaries) and Bowling (Strike Rate, Economy Rate and Dot Balls). All of these performances are normalized at a relative level within a match, and the impact of the runs scored or wickets taken are also taken into account. This ensures that one big innings or one big fifer does not influence a player's position at the top and consistency across matches is rewarded. This technique helps fans genuinely spot who the most valuable player of the IPL 2020 is.

The interesting bit is that both Jofra Archer and Rahul Tewatia have been the top-rated players in two matches each and have been at the 97th percentile of performances in two other games. That’s 6 out of 7 games bossed by these two unlikely lynchpins of the Rajasthan Royal stable.

Archer’s consistent economical spells, has pushed batsmen on the back foot and in some cases to the safe confines of the non-striker’s end. He has the highest percentage of balls that have been left alone this IPL, and that fear of raw pace, puts the opposition on the defensive. 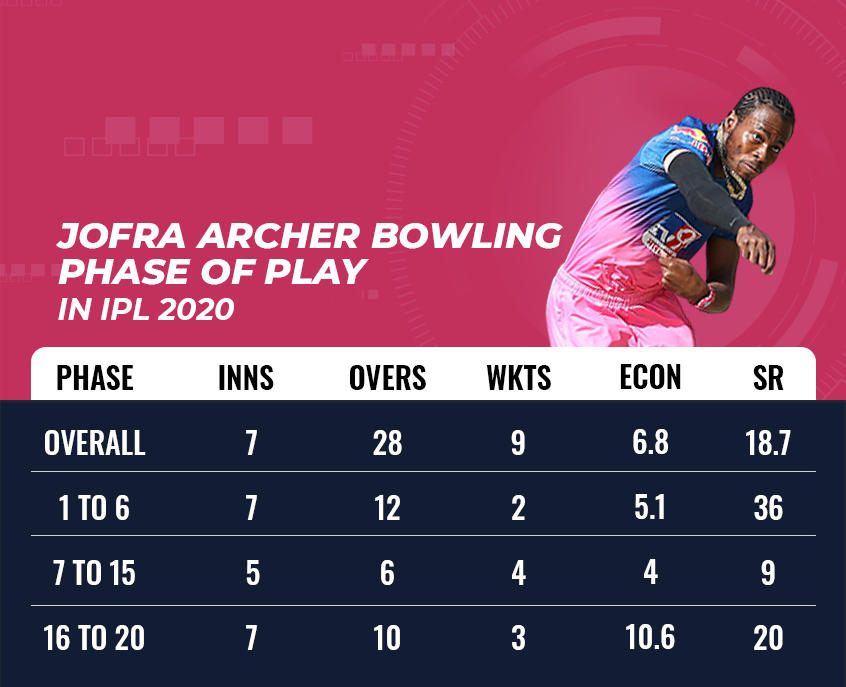 Out of the seven games that Jofra has played, he has been their side’s top performer in two games and near-top performer in one. That’s top notch level and value that a single player adds to the team, that’s still hanging midway between flashes of brilliance. 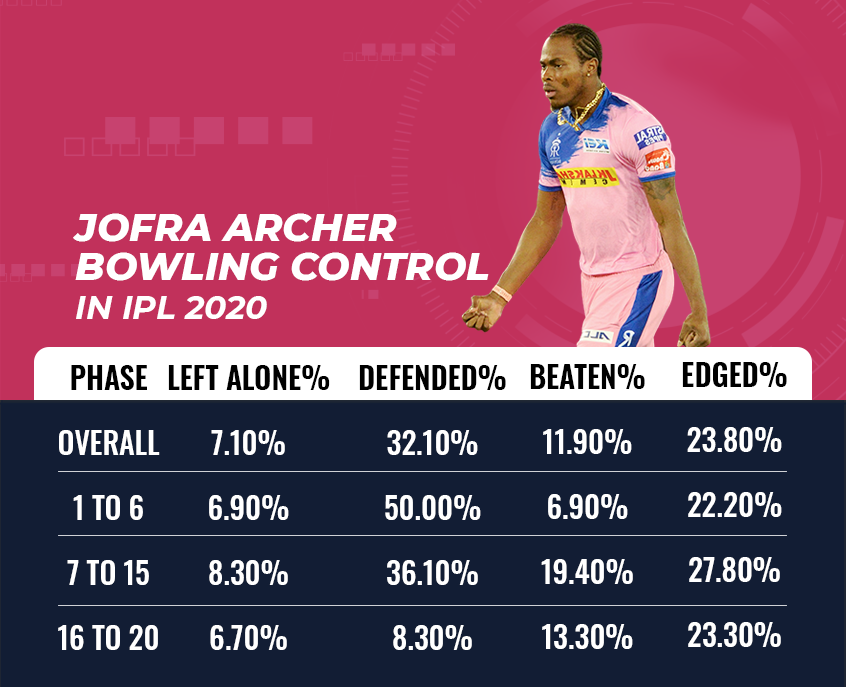 His batting at the end has given his team an edge when it comes to the death overs. He has 13 boundaries in 40 balls overall, and given that he bats mostly at the death (where he strikes at 245), he is primed at moving the win% at key moments in the game, which makes him the Criclytics mid season MVP. 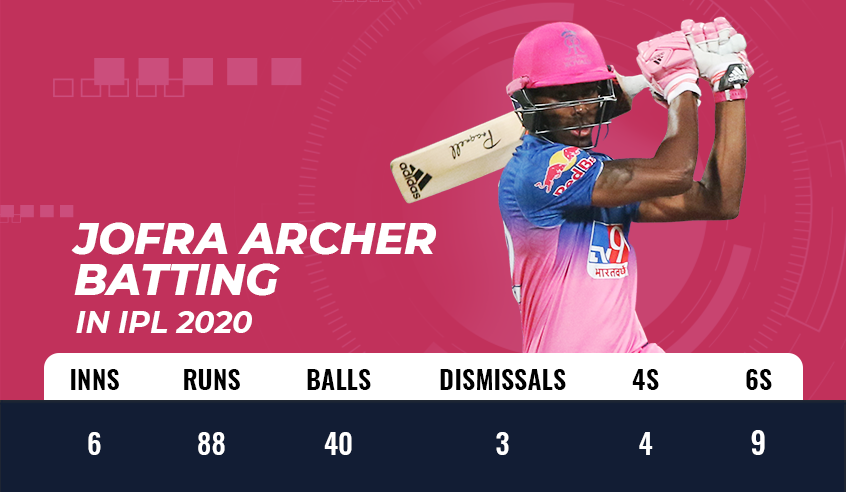 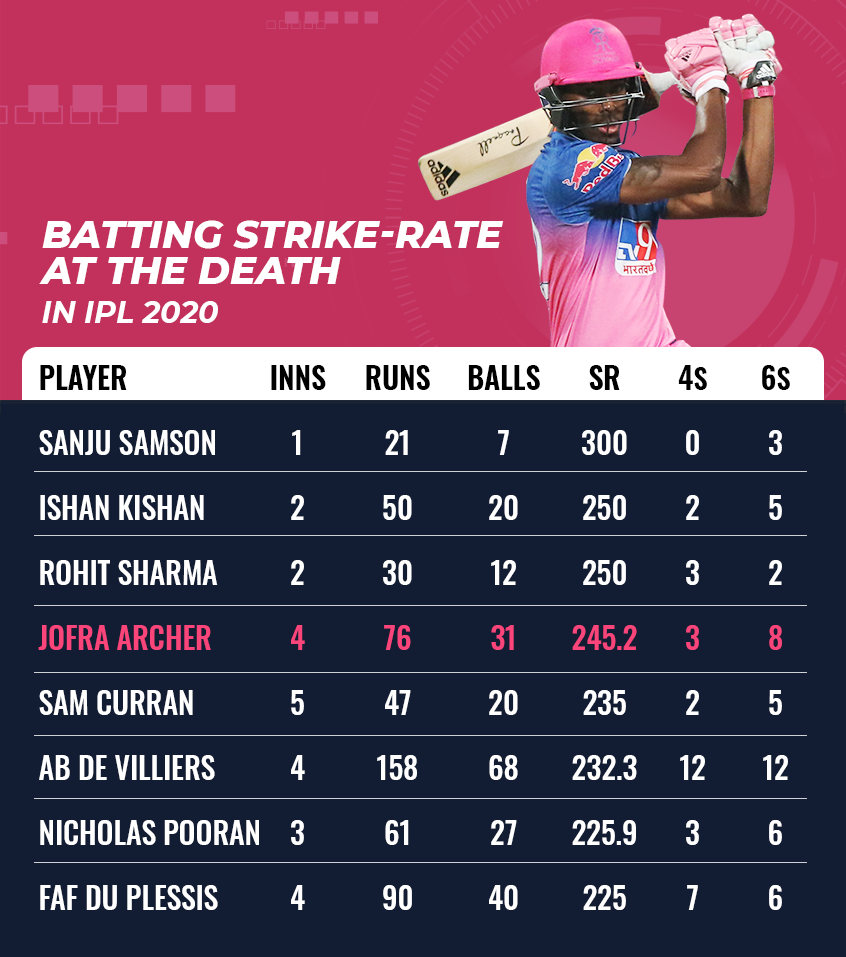 It ain’t over until Tewatia sings, is the modified version of Cricket’s famous adage ‘It ain’t over until the fat lady sings’. Twice Tewatia has been spotted starting the 16th over, languishing at scoring at run-a-ball. Twice he has taken them over the line in the most dramatic fashion, giving credence to the wealth of underdog stories of hope that is usually found in the Indian Premier League. His 189 runs at a 150+ strike rate and 5 wickets in 7 games, has helped him unlock the top three positions in the first half of the tournament.

His twin knocks against KXIP and SRH have helped Rajasthan stay ahead of two teams in the points table, despite having a wealth of English cricketers at their disposal.

A good indicator of a batsman playing long and playing aggressively is a combination of their batting average and strike rate. While Tewatia falls short of the BASRA benchmarks (Average of the Top 10 players in that phase), he still manages to turn around games on its head. 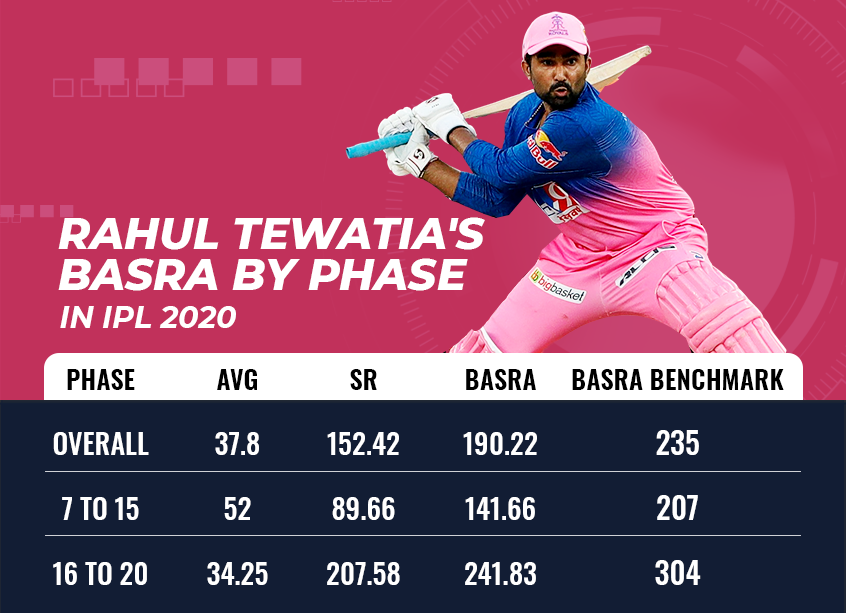 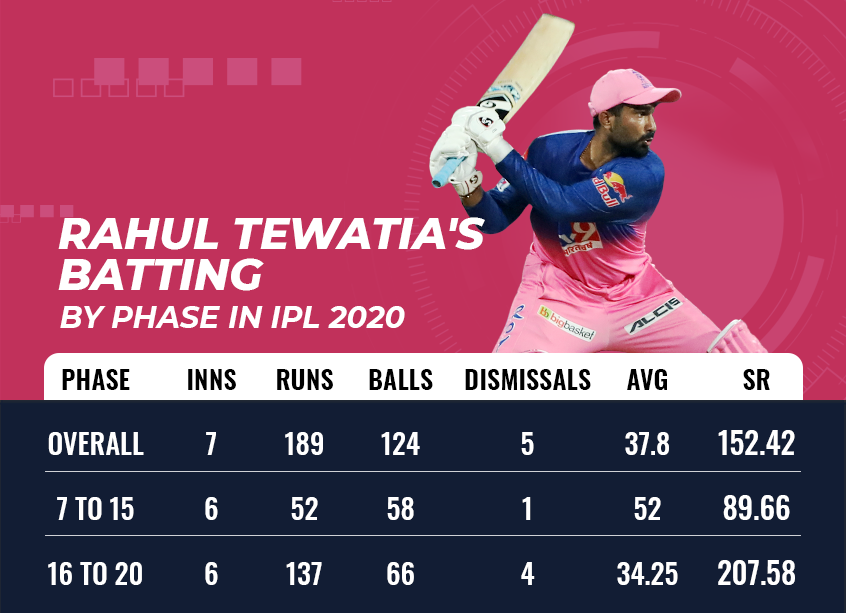 Rashid Khan's passport had a Trinidad and Tobago stamp for August/September this year before getting a UAE stamp added to it, while travelling for the IPL. If his mind had a passport, it would not have left home from Afghanistan. Losing his father in 2019, his mother earlier this year and a colleague Najeeb Tarakai, and dealing with it has been tough. Rashid recalled his mother’s influence on his IPL performances recently. “My mom was my biggest fan, especially in the IPL and when I was the MoM, she would always talk to me through the night,” recalled an emotional Rashid at a post-match presentation

Rashid has had three green performances this year and has been the driving force behind SRH’s middle overs strategy, doing the double of maintaining a brilliant economy rate of 5 runs an over and also picking a wicket every 17 balls. His batting yet has not got an opportunity to kick in, but one hopes that the SRH team management see the point in beefing their middle order with Nabi and Rashid, given their all-round abilities to turn matches with the bat.

Like most legspinners, Rashid has started to make his googly as his stock delivery, while the legbreak seems to be used more as a surprise element. The wrong'un is used to entice batsmen to largely defend, but it makes batsmen do mistakes and most of his wickets have come from googlies. The legbreak goes at four an over, without really helping him bag his wickets, but keeping things quieter, while batsmen have tried attacking him more on his legspin. Sounds oxymoronish but that’s the genius of Rashid! 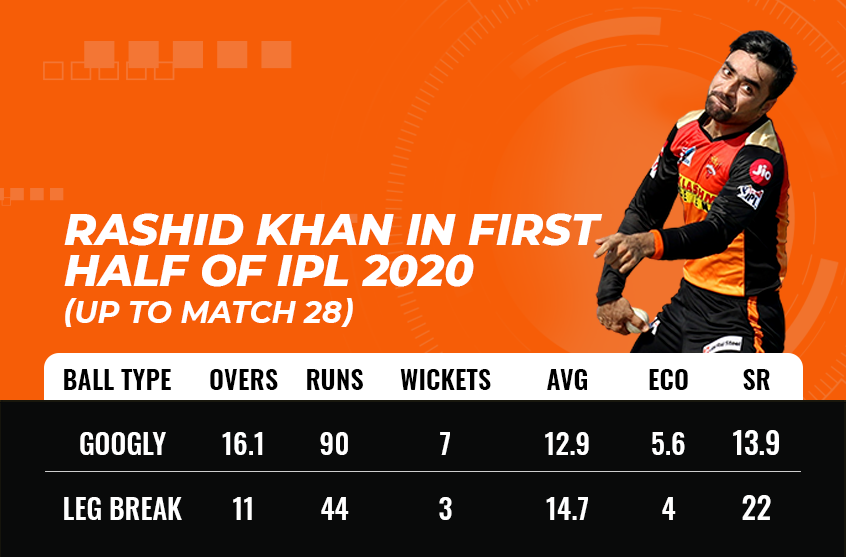 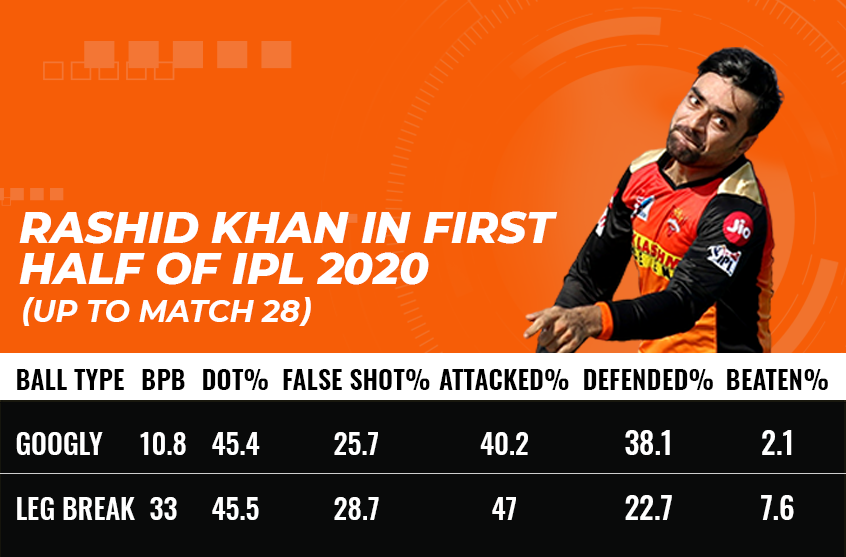 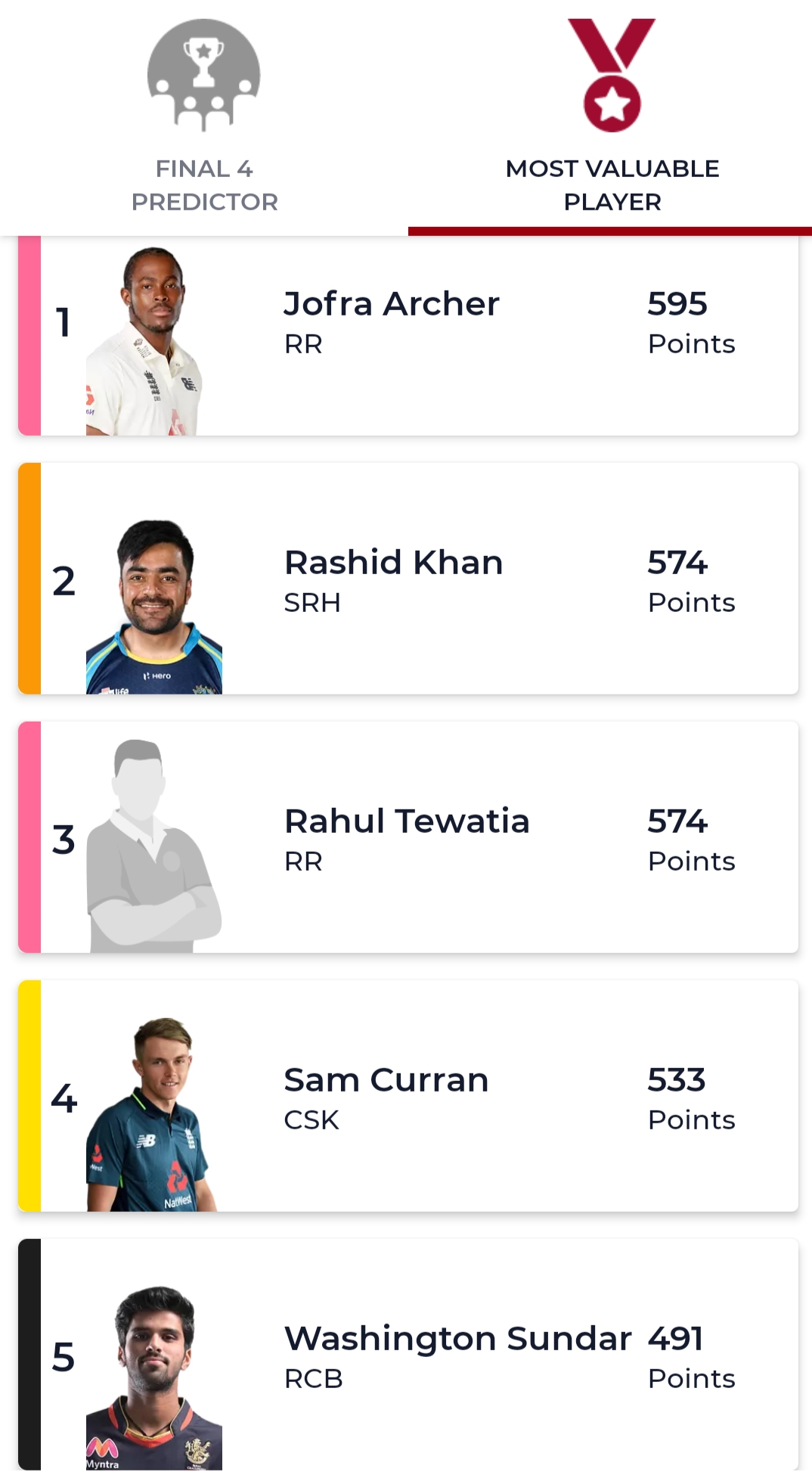 Three teams (MI,DC and RCB) have been looking very good, while the other teams have been blowing hot and cold this season. It’s going to be an interesting second half to see if the scenario changes in having different teams in the top 4. As per Criclytics' pre season prediction three out of the top four have exactly been bang on, while CSK remains the only prediction that has gone awry, but we’ve seen that in the IPL it’s never over until it's over, so it still remains to be seen if CSK can do a repeat of 2010, IPL where they were in a similar situation in the first 7 matches (Won 2, Lost 5). 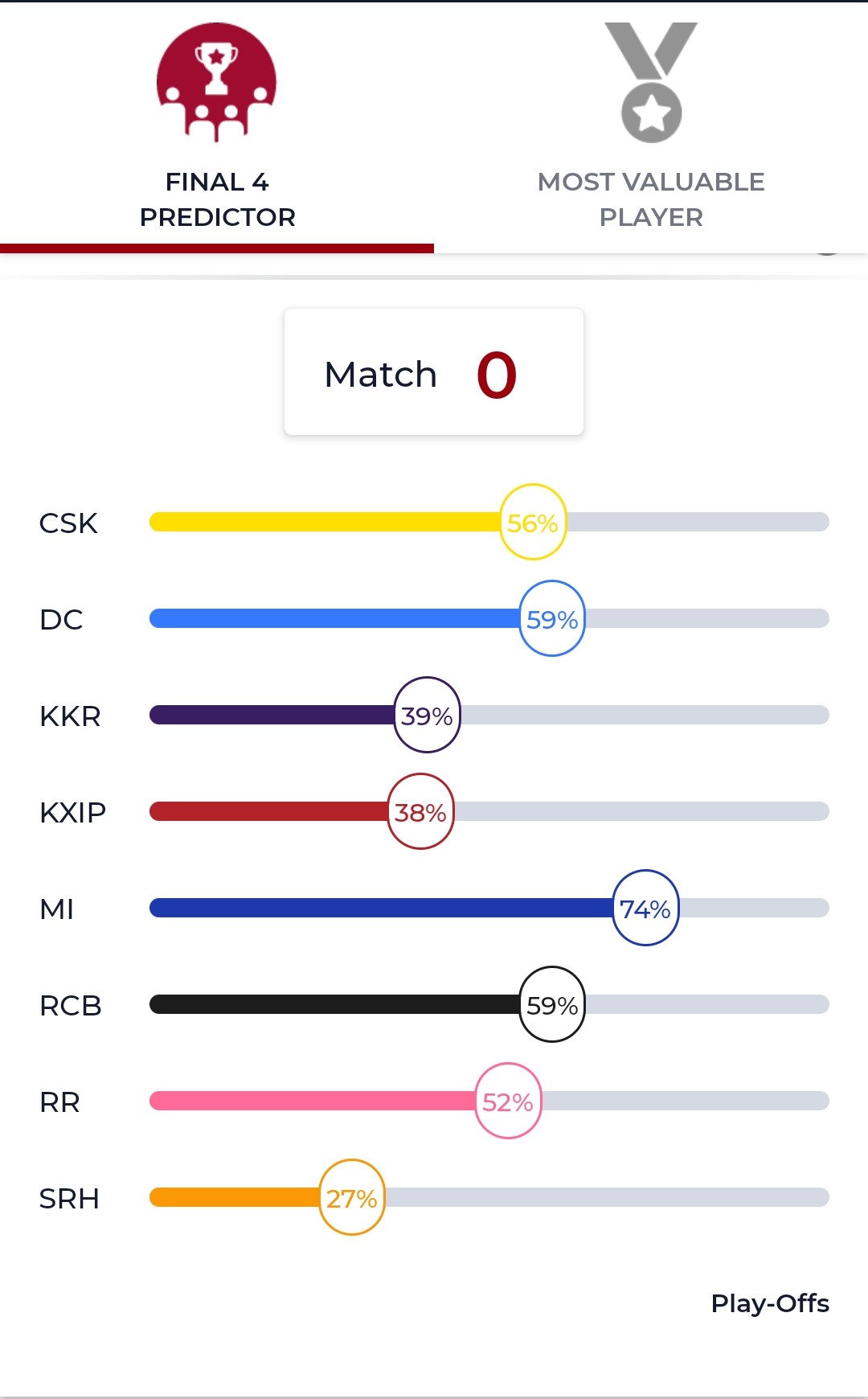 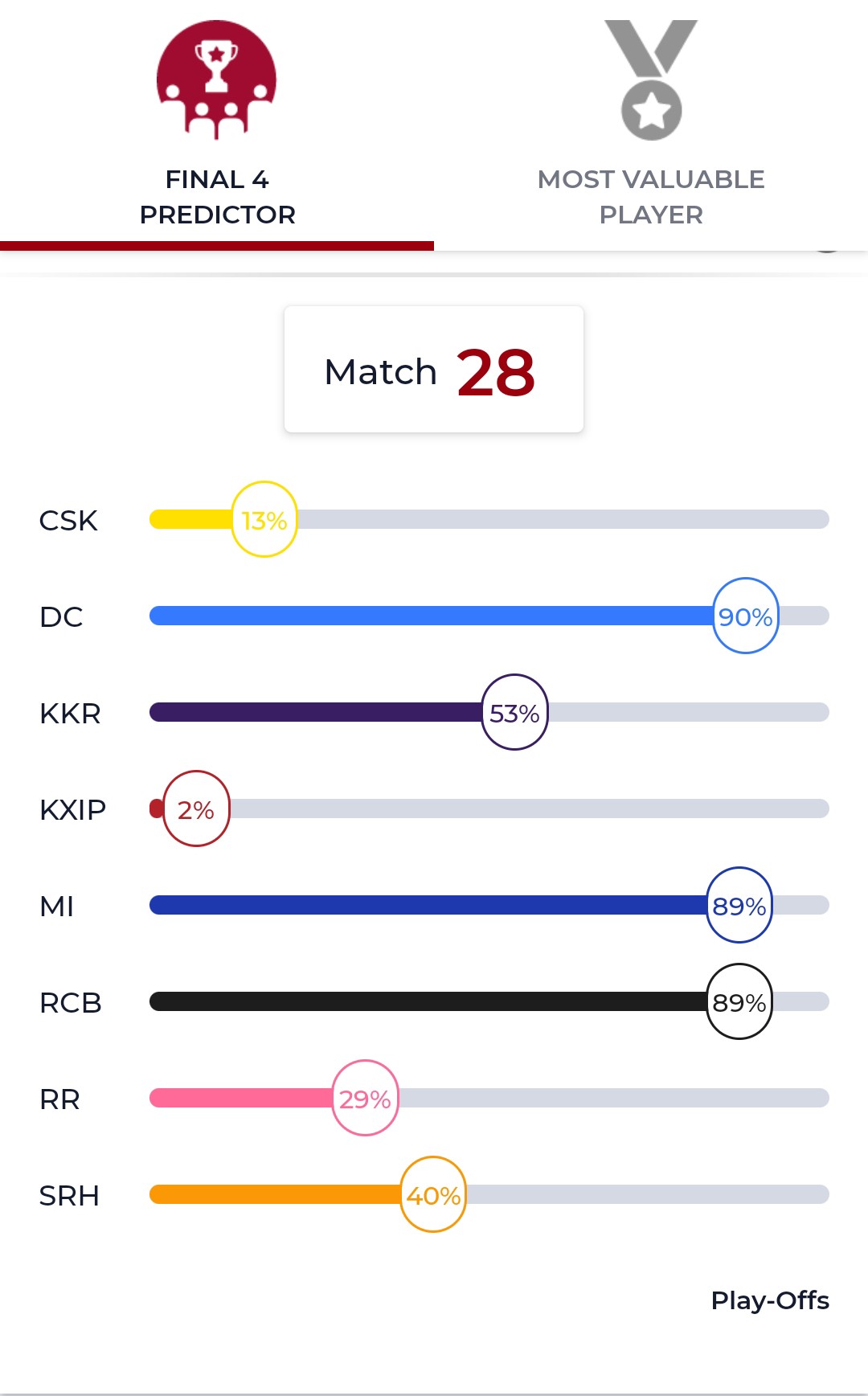 MI, DC and RCB have done well to get to 10 points in the first half, while the other teams paint a very sorry picture trying to battle form and consistency.

The top three positions look more or less decided, because these teams look settled with a template of their own that’s worked well for them. They even have great reinforcements, if injury forces a player out.

The three teams that may have an outside chance to compete with KKR for the 4th spot look like RR, SRH and CSK, as they try to take stock of their failures and attempt to come back into the tournament in the next half. KXIP are nearly out, but if a couple of the top three teams, have some bad losses, it allows the bottom teams to keep their hopes high.

So what’s your expectation of how the second half would pan out? Use #CricketLikeNeverBefore on Twitter and let's continue the conversation there!